The Toyota TF107 is the car with the Toyota team competed in the 2007 Formula One season.

The main changes in comparison to its predecessor, the TF106B are aerodynamic.[1] The position of the engine has been moved forward by 100 mm, meaning that the chassis tub is shorter. This has been achieved by reshaping the monocoque, and has not incurred a reduction in size of the fuel tank.[2]

The area below the nose of the car is clear of intrusion from suspension components due to the "zero keel" design. In fact at the front of the car, the monocoque is 30mm higher than on the TF106B, which has resulted in dramatically sloped suspension wishbones. Although this approach compromises the front suspension geometry possibilities, the Toyota engineers came to the conclusion that this was not a problem.[1]

Jarno Trulli driving the TF107 at the 2007 Bahrain Grand Prix. 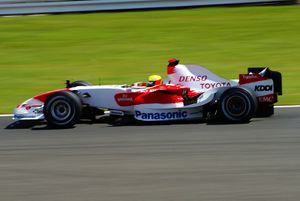 Ralf Schumacher at the 2007 British GP.

Owing to the new homologation rules on engines imposed by the FIA, the engine (called the RVX-07) is based on that used by Jarno Trulli in the 2006 Japanese and Brazilian Grand Prix. Only limited changes from this design have been allowed, in order to optimise performance for the 19000 rpm rev limit which will be enforced in 2007. Several changes have been made to the pistons and valves and other components, although the engine block may not be changed.[1]

In 2007, the WilliamsF1 team are using Toyota engines as a customer team. As part of this partnership, Toyota use a new gearbox developed in collaboration with Williams, which uses seamless shift technology. Only the gearbox internals are shared with the Williams' 2007 car, the FW29, the TF107's gearbox casing being made by Toyota.[1]