The Toyota S Series engines are a family of straight-4 engines with displacement from 1.8 L to 2.2 L produced by Toyota Motor Corporation. The series has cast iron engine blocks and alloy cylinder heads.

Second revision of the block. Already equipped with EFI. This particular engine was used in the Toyota Camry and in the Celica on the US market. Last of the few S engines which is not equipped with twincams. The single overhead cam was fitted with bucket tappets with so called "hockey puck" adjusting discs. 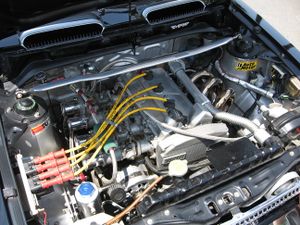 The fourth generation of the Toyota 3S-GE series, dubbed by Toyota as "Breakthrough Engine with Advanced Mechanism System". This series is technically advanced, even more so than the 2JZ-GTE. The first generation engine (Red Top) uses single cam VVT-i, the second (Black Top) employs dual VVT-i (on both the intake and exhaust) to provide 150 kW. It is available on the Toyota Altezza, Celica, Caldina, Corona and MR2 and is the only 3S-GE to arrive in a rear-wheel drive layout from factory.

The 3S-GTE takes the basic design of the Toyota 3S-GE engine, reduces the compression ratio to 8.5:1, and adds a turbocharger. There are four generations of this engine, which started manufacture in 1986, and continues to the current day.

The turbochargers used in the 3S-GTE engines are Toyota designs. The first and second generations used the Toyota CT26, although the second-generation turbo was modified for increased reliability. The third-generation engine uses the (enthusiast dubbed) Toyota CT20b turbo, and the fourth uses a proprietary CT20b turbocharger whose exhaust housing is actually cast into the cylinder exhaust manifold, rather than the normal practice of a separate exhaust housing after the cylinder exhaust manifold and it can only be used on the 4th Gen 3S-GTE head and not backwards compatible like the CT20b of the 3rd Gen 3S-GTE. Up to 260 hp in stock engine.

This engine was essentially the same basic design as the 3S-FE, but features an increased stroke, and the total displacement was increased to 2.2 L. It was only marketed for the American and Australian markets, and are used in the 5th and 6th generation Celica, the 2nd generation MR2, the 3rd and 4th generation Camry, as well as the 1st generation Camry Solara. The 5S-FE was available in several variations each being distinguished by the Valve Cover design. The 1st gen introduced in the 1990-1992 Celica GT/GT-S, and MR2 had a power rating of 130 hp and 144 lbs-ft/torque. the 2nd Gen was introduced in 1993 with the 5th Gen Celica ST184, and continued on throughout the 6th Gen Celica ST204. The 2nd gen was also used in the MR2 SW21 and Toyota Camry/Scepter XV10 series and had a power output of 135 hp and 145 lbs-ft/torque. In states that had adopted California State Emissions the 5S-FE was rated at 130 hp and 145 lbs-ft/torque, this was due mainly to Emission equipment used in order to meet the Emissions regulations of those states. The 3rd Gen was the last 5S-FE engine to be produced and was used in the 1997-2001 Camry XV20 and 1999-2001 Camry Solara. From 1997-1999 the Engine Produced 133 hp @ 5200 RPM and 147 lbs-ft/torque @ 4400 RPM. from 2000-2001 the Engine received modest improvements upping power output to 136 hp @ 5200 rpms and 150 lbs-ft/torque @ 4400 Rpms. The 5S-FE was replaced in all Applications by the 2.4 Liter 2AZ-FE engine


Models with this engine: