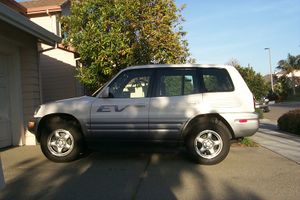 The first fleet version of the Toyota RAV4 EV became available on a limited basis in 1997. In 2001 it was possible for businesses, cities or utilities to lease one or two of these cars. Toyota then actually sold or leased 328 RAV4 EVs to the general public in 2003, at which time the program was terminated despite waiting lists of prospective customers.

The RAV4 EV closely resembles a regular ICE version - without a tailpipe - and has a governed top speed of 78 mph (~126 km/h) with a range of 100 to 120 miles. The 95 amp-hour NiMH battery pack has a capacity of 27 kWh, charges inductively and has proven to be amazingly durable. Some RAV4 EV's have achieved over 150,000 miles on the original battery pack.

The RAV4EV has a governed top speed of 78 miles per hour (126 km/h), a tested 0-60 time of around 18 seconds (depending on state-of-charge on the batteries) and a range of 80 to 120 miles (130 to 190 km). Mileage depends on the same factors as a traditional gasoline-powered vehicle, mainly rolling resistance and average speed (aerodynamic drag).

The RAV4EV's batteries can be recharged from being fully depleted to fully charged in about 5 hours, and are monitored with a passive battery balancing system. Charging is supplied via magnetic induction by a wall-mounted 6000-Watt charging unit on a 220 volt, 30 amp, North American "clothes dryer"-type plug.

In addition, the RAV4EV has a charge timer built into the dashboard that enables the vehicle to start charging at a specific time. As the RAV4EV easily becomes the main cost of electricity in an average-sized home, this enables the owner to use a Time-Of-Day Meter to reduce electricity costs. This configuration is a standard practice with RAV4EV owners. The price of electricity at night depends on the carrier, but is usually in the range of 60% of the normal rate. In the use of charging the RAV4EV, this equates to a cheaper cost-per-mile, roughly equivalent to a vehicle capable of 166.6 mpg (miles-per-gallon) (1.41 L/100 km), based on a price of US$3.00 per gallon.

The United States Environmental Protection Agency listed mileage ratings for the RAV4EV in its yearly Fuel Economy Guide from 2000 through 2003. The 2003 model recorded city mileage equivalent to 125 mpg, and 100 mpg on the highway. Estimated combined mileage was 112 mpg.

The RAV4EV's battery system is a wearable item. Third party battery vendors charged approximately US$26,000 as of June 2007 on eBay for replacement packs. Toyota tested the RAV4EV in Japan for 300,000 miles over two years before introducing the vehicle in the United States. It should be noted that the economies of scale are affecting the replacement cost of the RAV4EV.

The remaining systems in the RAV4EV are comparable to the gas-powered RAV4, such as power brakes, power steering, air conditioning, tire wear and suspension components.

RAV4 EV pre-production prototypes were first released in a confidential evaluation program with electric utilities throughout the U.S. These prototypes were based on the smaller, shorter, two-door version of the RAV4. The prototypes included some versions fitted with Panasonic NiMH batteries, and others with high-performance Panasonic Lead-acid PbA batteries (the same ones that eventually found their way into the EV1 and other production GM hybrids). The RAV4EV prototypes also were equipped with on-board Level II chargers and connected via a front fender conductive charger coupling made by Yazaki Corporation. Both prototypes were well accepted.

The utility employee evaluators did not have to personally pay for the more costly and advanced NiMH batteries, and the NiMH RAV4 EV prototype received better reviews, due to its increased range. Its energy efficiency, however, was not as good as the PbA version. Due to the impracticality of developing two battery types for a limited volume program, Toyota opted for the higher-performance, higher-cost NiMH RAV4 EV. This resulted in a greater manufacturing cost, and higher purchase price.

RAV4 EVs were only available for three-year fleet lease, not for sale and not for lease to the public, at a few dealerships beginning in 1997. In 2001, leases were made available to small "fleets of one" purportedly run by small businesses.

In March 2002, due to a shift in corporate policy, the Toyota RAV4-EV was made available for sale to the general public, but only 328 of them sold. No one knows for certain what prompted Toyota to change their position on the RAV4-EV, since they had long since fulfilled their obligations under the MOA with the California Air Resources Board's zero-emissions vehicle (ZEV) mandate via its fleet lease program. There is speculation that the shift was the result of a Toyota Managing Director’s erroneous public statement at EVS-17 in Montreal that EV's were available for purchase. Perhaps in an effort to avoid embarrassment or perhaps to bolster consumer confidence Toyota changed their policy.

By November 2002 the 328 RAV4-EV’s Toyota had committed to were sold, yet demand was continuing to build. Toyota was caught off-guard by the extent of the demand because the vehicle's retail buyers had outsold the projections far faster than the vehicles could be supplied to market - despite very little advertising, and very little public awareness of the product.

There was certainly a market for these vehicles, because many GM EV1, Ford Ranger EV and Honda EV Plus drivers had been reluctantly forced to surrender their cars – in some cases to the crusher – and had become disillusioned with the carmakers. Potential buyers were encouraged by the perception that Toyota was finally playing fair.

As it turned out there were more RAV4-EV's sold than there were cars available. It is noteworthy that Toyota did, in fact, play fair and filled every last order despite the fact that the last few dozen vehicles had to be painstakingly assembled from spare parts due to a shortfall of production components. This unexpected development caused deliveries to trickle on into September 2003. It also caused variations in the vehicles such as heated seats, retractable antennae, mats, etc. As an example, seat covers ordered for a 2003 RAV4-EV won't fit, you must order them for the 1999 RAV4 gas model.

Once the last of the 328 EV’s was sold in November 2002, the website disappeared and the EV program was unceremoniously scrapped. No additional cars could be sold because Toyota didn’t have anything to sell. The RAV4-EV was based on the 1996-2000 gasoline powered RAV4, which had become obsolete. Production of additional vehicles would only be possible under one of two different scenarios. The first would be if the RAV4-EV was redesigned to fit the 2003 RAV4, the second would be if production of the 1996 version was resumed. Toyota claimed that tens of thousands of orders would have been necessary for them to resume or continue production, and development time would have been a major obstacle.

Whether or not Toyota wanted to continue production, it was unlikely to be able to do so, because the EV-95 battery was no longer available. Chevron had inherited control of the worldwide patent rights for the NiMH EV-95 battery when it merged with Texaco, which had purchased them from General Motors. Chevron's unit won a $30,000,000 settlement from Toyota and Panasonic, and the production line for the large NiMH batteries was closed down and dismantled. This case was settled in the ICC International Court of Arbitration, and not publicised due to a gag order placed on all parties involved.[1][2] Only smaller NiMH batteries, incapable of powering an electric vehicle or plugging in, are currently allowed by Chevron-Texaco.

So for those seven months in 2002 a full-sized production electric car was available for sale to the general public for the first time in decades. Buying one wasn't easy, however; just one special sales person at only a dozen dealers - and only in California - was authorized to sell the Toyota RAV4-EV. If an individual wasn't already aware of the car, they were generally unable to buy (or even see) one. Many would-be purchasers were steered instead to Toyota's Prius gasoline electric hybrid vehicle, despite having asked about the plug-in car.

Like other manufacturers, Toyota began destroying RAV4 EVs as they came off lease, after lease continuances were denied to owners. In 2005 an agreement was struck between Toyota and DontCrush.com (now PlugInAmerica.com) to stop the destruction and facilitate the continued operation of owned and leased vehicles. While no longer sold, the vehicle is still supported by selected Toyota service centers (mainly in California) and a strong owner community.

The RAV4EV is driven daily by hundreds of owners, now across the United States. These owners have built up an online community and have worked out ways to add options to the RAV4EV never offered by Toyota, with the most popular being keyless door entry and cruise control.

Toyota has not expressed interest in reviving the RAV4 EV line. Proponents for the RAV4 EV are hopeful that manufacturing processes will someday yield low-cost batteries capable of being powerful enough for the RAV4 EV drive system, and at a price that would be considered reasonable by the general public.

Due to the NiMH battery patent restrictions, development in replacement batteries for the RAV4EV (and other electric vehicles) continues with small firms building NiMH packs, and larger firms working on efficient manufacturing of Lithium Ion or other battery types.