The Toyota Publica was a small car manufactured by the Japanese automaker Toyota from 1961 to 1978. Conceived as a family car to fulfil the requirements of the "national car concept", it was the smallest Toyota car during that period and was superseded in that role by the Toyota Starlet, which itself started out as a version of the Publica. It was available as a 2-door vehicle only, but in a selection of body styles, ranging from the base sedan through a station wagon, convertible, coupé and even a pickup, which outlived the other models by a decade, and spawned other models, such as the Toyota Sports 800 or Toyota MiniAce.

The origins of the Publica can be traced to the "national car" concept of the omnipotent Japanese Ministry of International Trade and Industry, which was announced in 1955. The concept stipulated for a vehicle fulfilling several requirements, like maximum speed over 100 km/h (62 mph), weight below 400 kg (882 lb), fuel consumption not exceeding 1 litre per 30 km at the average speed of 60 km/h (37 mph) on a level road, but also notably the requirement that the car would not break down or require significant repairs for at least 100,000 kilometres (62,000 mi).

From concept to reality[edit | edit source]

Although Eiji Toyota was initially keen to take advantage of the, at that time innovative, FF concept (front-mounted engine with front-wheel drive), it proved technically too complicated for Toyota engineers to be able to complete within the allotted time, so the decision was made to switch to more conventional FR layout (front-mounted engine with rear-wheel drive). In spite of the fact that the government sources announced that significant tax breaks would be made for cars with engine displacements of less than 500 cc, Toyota decided that such a small engine would provide insufficient power on the highways, and increased the planned displacement to 700 cc. The resulting engine was an air-cooled 697 cc ohv 2-cylinder boxer which produced 28 hp (21 kW), and was known internally as the Toyota U engine. Fortunately for Toyota, the tax incentive announcements did actually not materialize.

The new car was given a 2-door sedan body, which was intended to accommodate 4 people and a significant amount of luggage in the trunk, thus fulfilling the projected expectations of the customers. The car had a double wishbone suspension in the front and semi-elliptical leaf springs in the rear.

The new car was given the internal designation of "UP10" and the market name of "Publica" and was sold through a new dealer network, separate from the previous "Toyota" and "Toyopet" dealerships. Sales began in June 1961, with the basic price of 389,000 yen. Initially, the car was very basic, lacking even such basic options like a radio or even a heater. This limited its appeal to the consumers, which were perceiving the automobile as an aspirational good and expected it to exude a much more luxurious impression.

Pronunciation of the name[edit | edit source]

While the name "Publica" was chosen with reference to the English phrase "public car", referring to the cars intended attainability and popularity, due to the lack of exact distinction between the "l" and "r" consonants in Japanese, the name can be sometimes misinterpreted as "pabrika", leading to unplanned associations with paprika.

Further development of the UP10 series[edit | edit source]

In 1962, a 2-door station wagon version was added, and a derivative model, Toyota Sport 800 (marketed initially as "Publica Sport") debuted at the Tokyo Motor Show. In 1963 Toyota added a new Deluxe trim level, denoted internally as "type UP10D", which featured such "luxuries" as reclining seats, heater or radio, as well as some chrome decors (the previous base model was now called Standard). With the appearance of the Deluxe, demand finally picked up, and when the convertible model was added the same year, sales of the Publica finally reached the target level of 3000-4000 monthly. In February 1964, a pickup truck model joined the lineup, and in September the engine got a power boost to 32 hp (24 kW), while the Deluxe trim level was also made available for the wagon version.

In 1966, Toyota launched the revised Publica range, designated UP20. The engine displacement was increased to 800 cc, and power to 36 hp (the engine was now called 2U) while the convertible received the 45 hp (34 kW) twin carburetor engine from the Sport 800. Since October that year, the dealers were operating under the "Toyota Publica" (rather than just "Publica") brand, and the base price was reduced to 359,000 yen for 1967 - as the US dollar stood at about 360 yen at that time, Toyota marketed the Publica as the "1000 dollar car".

In 1966, Toyota also launched the Toyota MiniAce forward control van, based on the UB20 Publica, as well as moved the production of the wagon version to Hino Motors in 1968, after the company was taken over by Toyota. 1968 also saw the launch of Publica Super version, which came with the engine of the Sport 800. 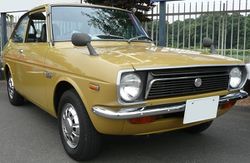 In 1969, a whole new generation of the Publica was launched. While 2U engine was retained in the cheapest versions, the cornerstone of the lineup was the new K-series 4-cylinder, water-cooled 1000 cc engine (designated 2K), a lower-displacement version of the 1100 cc engine used in the contemporary Toyota Corolla. The pickup version was now officially known as "pickup". The situation in the Japanese market changed, as demand developed rapidly, partially fuelled by the post-WWII baby boomers coming of age and gaining their driver's licenses. Having the Corolla firmly established as the family car offering, Toyota did not market the Publica as the "popular car" anymore, but rather as an entry-level vehicle for first-time young buyers.

In 1969, Publica dealerships were renamed "Toyota Corolla" dealerships, and the Publica SL was launched, which featured the 1.1 L K-B twin carburetor engine also offered in the Corolla SL. The following year, this engine was replaced by the 1.2 L 3K-B unit in both the Corolla and Publica SL's. As Toyota had just started its relationship with Daihatsu, in 1969 the latter launched the Daihatsu Consorte, which was essentially a mildly restyled P30 Publica. It was, however, powered initially by Daihatsu's own 1.0 L engine, which saw service in the previous Daihatsu model, the Compagno.

1970 saw minor changes to the range, including a new instrument panel, and a new High Deluxe version featuring the single-carburetor version of the 1.2 L engine and front disc brakes. A more substantial facelift took place in 1972, when the KP30 Publica was given new front and rear fascias. The U-engine model was dropped, as the boxer unit could not clear emission standards anymore. 1973 saw the introduction of the Toyota Publica Starlet (designation KP40), a coupé version of the facelifted Publica. The facelifted model continued until 1978, when it was replaced by the KP60, marketed as the Toyota Starlet. The Publica pick-up continued until 1988, being later fitted with the 1166 cc 3K and 1290 cc 4K-J engines.