The Toyota Noah is an eight-seater MPV with two rear sliding doors built by Toyota Motor Company and sold only in Asia. A five-seater version without the third seat row is available (YY grade). Its predecessor was the Toyota Liteace Noah. The Noah has a twin version named Toyota Voxy.

The Toyota Voxy leads to great performance for a car of its class.It has 154HP which gives 9.8seconds to reach 100Kph(60Mph) with a top speed of 175kph(tested). It also has a very good breaking capability but it also has errors with the balance. But the Toyota Voxy has better handling and stability than the old models of Noah. It also has a very comfortable suspension which lead to less bumps than the old versions.

First launched in 2001, it is positioned below the Estima and Alphard, and above the Sienta. Consequently, its main competitors are the Honda StepWGN and the Nissan Serena.

The current design of the Noah was released in 2007. This version has a 2.0 L gasoline direct injection engine, CVT and standard front wheel drive or available 4WD. 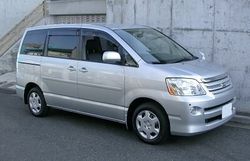