Toyota Land Cruiser Prado is a model designation used in Japan, Australia, South Africa, Middle East, Southeast Asia and Latin America as well as other parts of the world for light-duty, mid-sized four-wheel drive cars in the Toyota Land Cruiser line. They are produced by the Japanese car maker Toyota Motor Corporation. The car is marketed in many other parts of the developing world, such as the Caribbean and large parts of Africa.

In Europe it is sold as simply Toyota Land Cruiser, or with the number series designation (LC 70, LC 90 and LC 120). In North America it is not part of the Land Cruiser range, being instead sold as the Lexus GX 470, with nearly identical body panels and a V8 engine.

The current Prado is based on Toyota's J12 platform. Previous models were based on the J9 and J7 platforms. All models designated Prado feature front independent suspension, ladder frame, and a two-speed transfer case.

The Toyota Land Cruiser Prado is available in GX, GXL and VX spec versions, with either short or long wheel base. The GX is the entry level model, while the VX is the more luxurious version. In most markets it is available with either a 4.0 L petrol V6 and a 3.0 L Diesel engine. In some European countries there are commercial van variants, based on the short wheel base chassis. 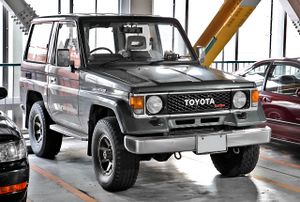 First developed as the light duty of the 70 Series, in November 1984. Available only in short body, and there were options for soft top or hard top (metal top). Names like Land Cruiser II, Land Cruiser, and Bundera were made for these 'Light Duty' Land Cruisers. There were 3 engines options with gasoline engines, 2.4 L (2366 cc) 22R engines and 2.4 L (2446 cc) 2L and 2L-T diesel engines. Transmission for the gasoline engine is G52 type while the diesel used the R150 and R151 type. These were the same engines and transmission used in 4Runner, in cooperation with Hino. 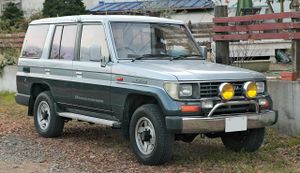 By April 1990, a new type was developed. The front grille, front fender and engine hood were redesigned. The head lamp went through changes in design as well. At the same time, the sub name Prado were attached, but names like Land Cruiser and Land Cruiser II were still in used in other parts of the country besides Japan. Meaning plain or field in Portuguese, Prado is the new line from Land Cruiser suited more for on-road purposes, though it is also a highly capable off-road vehicle. Created as Super Hybrid 4WD, it comes with electronic fuel injection and 4 speed automatic transmission. The 2.4L diesel engine with 97 metric horsepower (71 kW) and 24.5 kg·m ( 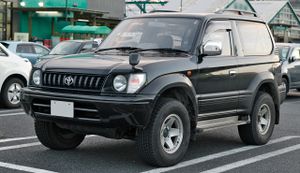 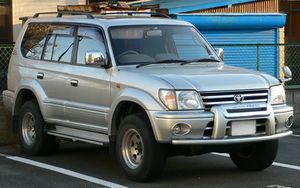 In May 1996, the 70-series underwent a makeover and emerged as the 90-series Prado, an independent series. The body was enlarged in and out. The design was heavy-duty, like the 70-series Prado, but with a smaller engine and lighter classification compared to the full-sized Land Cruiser series. Although new in designs, the suspension is similar to those used in Tacoma and Hilux Surf made by Hino.

The 3-door series starts with an R in the series ranging from RZ, RX, RS to RJ while the 5-door line-up starts with T in the series ranging from TZ, TX, TS, to TJ. All models comes with model front double wishbone and 4 linked suspension as well as full-time 4WD. ABS and Field Monitor showing altimeter, termometer and pressure was standard in all the models. Television display and audio set was also optional.

By June 1999, minor changes were made. In order to follow the new law, fog-lamps were attached to the bumper. In July 2000, a new developed diesel engine, 3.0 L (2982 cc) Common Rail Diesel Injection (D-4D) 1KD-FTV was introduced into this model. With the 1KD-FTV engine, Prado can finally be on par with the Land Cruiser series when it comes to power. In order to avoid thievery, engine immobilizer was available. TX Limited with 8 seats used TX base with roof rail, rear under mirror, wood panel finish, arm rest, optitron meter, base cooling as well as rear heater was introduced into this series. The 90-series Prado was replaced by the 120-series Prado in 2003.

It dropped the Colorado name tag in 2003, when it was renamed simply Land Cruiser. 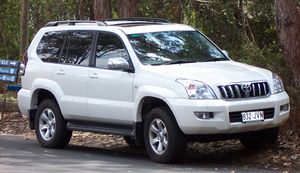 First appeared in 2003, this is the newest model of Land Cruiser Prado group. This model no longer follow its predecessors title known as the 'light duty' Land Cruiser but rather as a mid-sized luxury-type SUV. A new 4.0 L (3955 cc) V6 1GR-FE gasoline engine was available only in Europe first.

Diesel models have had the 1KZ-TE turbo diesel engine with maximum output rating 131 PS (96 kW) as well as the 5L-E natural aspirated diesel engine rating 95 PS (70 kW) . In November 2006, Toyota introduced the 1KD-FTV Turbo Diesel (D-4D] engine to meet Euro IV emission standards. This engine delivers 173 PS (127 kW) of power and 410 Nm of torque. The upgrade to the D-4D engine was also matched with transmission upgrades to the diesel range, with the 5-speed automatic and 6-speed manual transmissions added in line with the petrol powered range. From August 2007 the Prado received several equipment and safety upgrades.

A similar SUV manufactured in China, the Dadi Shuttle, has near identical front end styling to the Prado, but it is not a badge-engineered Land Cruiser Prado.