The 70 Series is a family of Toyota Land Cruiser models produced from 1984 until the present day. It replaced the 25 year old 40 Series as the off-road workhorse of the Land Cruiser heritage, while the 60 Series (and later the 80, 100 and 200 Series) developed into more comfortable passenger off-road vehicles. Despite major changes in styling and numerous technological updates, the 70 Series was designed to retain the off-road capabilities and durability for which the 40 Series had become known. The 70 Series was marketed throughout the world, except for the USA.

Originally, model numbers 70 through 74 referred to the 2 door short and medium wheelbase versions. These were the successors of the famous 40 Series, such as the FJ40. Model numbers 75 through 77 referred to the long wheelbase version, which was available in pick-up and 2 door troop carrier models and, in a few markets, a 4 door wagon. These were the successors of the less-well known long wheelbase 40 Series, such as the FJ45. In 1999, Toyota introduced several updates and changed the model designations. The long wheelbase models became the 78 (troop carrier) and 79 (pick-up) and, in 2007, the 76 (4 door wagon). Short wheelbase models are only in production today for a few select markets.

1984 - 1998: The 70 / 75 series Toyota Land Cruiser took over from the 40 / 45 series of workhorse four wheel drives in 1984. The styling maintained a family resemblance to the 40 / 45 series but became more angular. The 70 / 71 series was the short wheel base (SWB), the 73 / 74 was the medium wheel base (MWB) and the 75 / 77 was the long wheel base (LWB). The latter came as cab-chassis/utility with a "panelled" tray (pick-up), and "troop carrier" hard-top (HT). Toyota also manufactured lighter duty versions that shared the 70 Series designation from 1985 to 1996, and were marketed in various parts of the world as the Bundera, the Prado, or the Land Cruiser II. Of these, the Prado name stuck, and each modification took it further from its 70 Series roots. Starting in 1997 the Prado was known as the 90 Series, and had become a light duty passenger 4x4 with no relation to the 70 Series.

1999: The pick-up version was designated the 79 series, the Troop Carrier became the 78 series, and the short wheelbase version was phased out in most markets. The principal mechanical changes were - coil sprung (instead of leaf sprung) live front axle, longer rear leaf springs, 5-bolt wheels instead of 6-bolt wheels, redesigned steering wheel, redesigned front indicators, and, in the cab-chassis, a longer wheel base which increased the rear storage capacity.

2007: The updated 70 Series began production in January for market release in late February / early March 2007. Changes involve minor frontal design adjustments which incorporate the headlamps into the front profile of the vehicle due to the chassis rails being moved outwards to accommodate the new V8 turbo-diesel engine - a dramatic change nonetheless considering the exposed lamps and wheel arches have been a signature design component of the 70 Series from day one. In Australia, only one engine is now on offer: a 4.5L V8 turbo diesel 1VD-FTV. For Africa and some other markets Toyota decided to keep the 1HZ and 1HD diesel engines and the 1FZ petrol engine. The cab-chassis / tray back (LWB) and Troop Carrier (LWB) bodies will remain; new to the range is the 76 series, a four door MWB wagon variant. 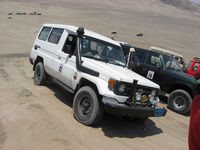 HZJ75LV-MR
The long version of the 70 Series also known as "Troopie" during the Land Cruiser Jamboree. This one has a 6 cyl. 4.2 liter diesel engine and 135 HP 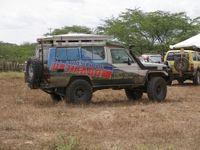 Square-bodied Land Cruiser utility 4x4. Two or four doors with steel doors and top, slanted windshield. The front-clip styling remains much like that of the 40 Series. The grille can be mesh or can consist of three horizontal bars.

Both have three additional horizontal slots in a single line under the grille. Front turn signals are square with triangular white lens elements underneath, and are affixed to the vertical edge of the front clip above the fenders and just outboard of each headlight. The top can be hard or soft. The doors are hard, with roll-up windows. Taillights are long, vertical rectangles inset low into the rear bodywork. Rear doors are paired swing-out 'barn doors'. Windshields of some military versions will fold atop hood. Available in many forms, including , a four-door semi-long (J77V → J76V), a pickup (J75P → J79P), and long wheelbase utility wagon (J75V → J77V / J78V).

With the exception of a few light-duty models that evolved into the Prado, all 70 Series Land Cruisers have solid leaf-sprung rear axles. Solid front axles were leaf-sprung until 1998, when Toyota decided in favor of a coil spring front suspension with leading arms, and a slightly lighter front axle. Also beginning in 1999 the rear leaf springs were extended to allow for greater wheel travel (articulation) and increased ride comfort.

Most 70 Series Land Cruisers (both petrol and diesel models) use inline six-cylinder engines. The exception is the V8 diesel 1VD-FTV engine introduced in some markets in 2007. Regardless of the engine, a 5-speed manual transmission delivers power to a part-time four-wheel-drive transfer case with high and low range. The solid front axles are a full-floating design with manual locking hubs. The solid rear axles are available in semi-floating and full-floating variations. Selectable locking differentials (front and rear) are factory options in some markets.

Basic comfort features such as air-conditioning and radio are available, but the 70 Series lacks many of the refined and luxury features of the more expensive passenger Land Cruisers (80, 100, and 200 Series).

The suspension, interior and basic layout of these models are nearly identical to the more famous longer wheelbase 75 series Land Cruisers, but the frame and body is much shorter. This allows the Land Cruiser to be more nimble off road. This model was popular as a personal off road transport, but because the Land Cruiser was marketed almost exclusively as a commercial and government vehicle and because these were never sold in the largest auto market in the world, the US, few were built, compared to other Land Cruiser models.

However, these models were sold all over the world, except North America, in the 1980s and early 1990s. They can be found in Japan, Asia, Africa, New Zealand and South America. The short wheelbase models are not quite as common in Australia, but they are very popular in the homeland of Japan, where compactness and rugged 4X4 are a welcome combination. Today, few short wheelbase 70 series can be purchased new. Some are still in production today in some select South American countries and possibly still in the Japanese homeland.