The Kijang is a pick-up or minibus sold in Indonesia and Brunei, made by Toyota. "Kijang", meaning deer in Indonesian, was first introduced in Indonesia in 1977 and it has become the most popular car in the country ever since. This car is also sold in other countries, and is known as the Unser in Malaysia (Innova for the fourth generation), Zace in Taiwan, Qualis and Innova in India, Nepal, and the Philippines, and Stallion and Condor in South Africa. The original Kijang is known as the Tamaraw in the Philippines (see the Revo for the history of the Tamaraw and Tamaraw FX).

It is relatively affordable in the markets where sold when compared to four-wheel drive vehicles (the Kijang is a two-wheel drive) and features high seating capacity, large ground clearance and rugged suspension, popular features in an area with generally poor road quality and large extended families.

In Indonesia, typically the whole extended family climbs in before even short trips, just for the adventure, as opposed to true car-pooling. The family Kijang is treated with love and many get professionally detailed every month. Depending on a person's size, the vehicle can carry as many as 9-15 passengers, since many of the countries the Kijang is sold in do not require safety belt usage at that time.

It is manufactured as a CKD (complete knock-down) in almost every country it is sold in, and many of the parts come from each of the markets in which it is sold.

In Indonesia, the Kijang is used as a city vehicle called an Angkot (Angkutan Kota) meaning city vehicle. The door has been changed to always be opened and the roof has been elevated. These Kijangs are usually colored blue or red, depending on where you are. The seats has been changed so now there are two long seats on each side. It makes the door always open so people can get on and off easily (AC is turned off).

The prototype was displayed at 1975 Jakarta Fair Show, and production began in 1977. The first Kijang is a boxy little pick-up truck powered by 1.2 liter 3K engine matched to 4 speed manual transmission. The pick-up with rear body and roof was also produced. The Kijang Minibus was built by a local company.

In English it means:

"First displayed on the 9th of June 1977. It was a "boxy" pickup with a half door, the window was only a plastic shield. The door ankle can be seen from the outside. The KF10 generation was using a 3K engine (like ones fitted in the Corolla). It uses a 4 speed manual transmission. This first generation Kijang was famous for being called "Kijang Buaya" (English translation "Crocodile Kijang") because the engine hood can be opened to the side of the car. This car sold 26,806 units until the 2nd generation Kijang was introduced."

The 20-series Kijang retained its boxy style although the body panels are different. Under its slimmer hood is a 1.3 liter 4K engine, and was replaced in 1986 by a 1.5 liter one. 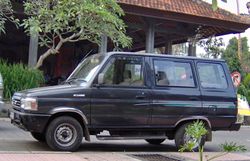 Introduced in late 1986, the Kijang was offered as short wheelbase (KF-40-series) and long wheelbase (KF-50-series). The Standard Kijang has 4 speed manual transmission, and the Super Kijang has 5 speed manual and a better equipped interior. Introduced in this generation was Full Pressed Body Minibus built by companies appointed by Toyota. It was derived from the 1984 Hilux.

Minor change was given in 1992. The Minibus now has right side rear door and adopted a new name Toyota Original Body instead of Full Pressed Body. Trim levels for Minibus are Standard, Deluxe, and Grand Extra. The new grille and 1.8 liter 7K-C engine were new in 1994.

This car was sold in India under the name of Qualis. The Qualis was based on the third generation model, but came with the newer fourth generation nose.

A version was built and sold in South African as the Stallion.

It was called as the Tamaraw FX in the Philippines when it was introduced in the early-90's. 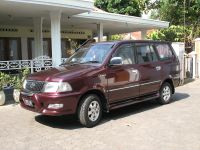 A 2003 model of Kijang LGX in Indonesia.

The new Kijang was more powerful and more refined than its predecessors. The Pick-up is coded 60-series. The Minibus, often known as Kijang Capsule is 70-series (short wheelbase), or 80-series (long wheelbase). Engine options are either 1.8 liter gasoline, or 2.4 liter diesel.

The fourth generation Kijang vehicles were generally released in two series of trims: 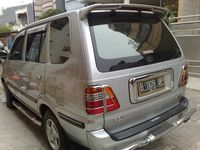 A 2003 model of Kijang SSX in Indonesia.

The Pick-up variant was offered with Standard Deck and Flat Deck. Trim levels for the Minibus included SX, SSX, SGX (short), LX, LSX, LGX, and Krista (long). The short wheelbase and sporty Rangga was also offered for a short time.

In the year 2000, the Kijang got a new front end. The 2.0 liter engine was offered in the LGX and Krista models. Another minor change was given in 2002 with new grille, rear garnish, and some small changes with its features.

Fourth generation Kijang, in Indonesia, had changed three times : a. First edition (1997 - early 2000) : The body's steel is thicker than 2nd edition. The window was still equipped with rubber-seal. b. Second edition (2000 - 2003) : Thinner body-steel was used to decrease production cost and therefore, the new model is sold as cheap as the 1st model. Uses compound sealant on front and back windows. c. Third edition (2003 - 2005) : LSX and LGX series and SGX for short series now equipped with suede doortrim (the older model uses carpet-like doortrim). The interior changed into full cream color (the older models' color is gray).

In 2004, Toyota launched the new Kijang. With the introduction of the new Avanza as a cheaper version to replace non-premier Kijangs in late 2003. The new 2004 Kijang is more luxurious and expensive than the 4th Generation. This all new Kijang is called the Kijang Innova. Innova is a MPV powered by either 2.0 liter 1TR-FE VVT-i Gasoline, 2.7 liter 2TR-FE VVT-i Gasoline, or 2.5 liter 2KD-FTV D4-D Common Rail Diesel. It is part of Toyota's IMV program and shares the same platform with the Hilux Vigo pickup truck and Fortuner SUV.

The Innova MPV is also sold in India (where it's known as an MUV), Malaysia, and the Philippines. In the Philippines, it discontinued the Tamaraw/Tamaraw FX/Revo line in the process (as the Toyota MPV sold there became simply known as the "Innova").