The Toyota JZ engine family is a series of inline-6 automobile engines. A replacement for the M-series inline-6 engines, the JZ engines were 4-valve DOHC engines. The JZ engine was offered in 2.5 and 3.0 litre versions.

Like all JZ-series engines, the early 1JZ-GE is designed for longitudinal mounting and rear-wheel-drive. All of these models also came with a 4-speed automatic transmission as standard; no manual gearbox option was offered.[1] 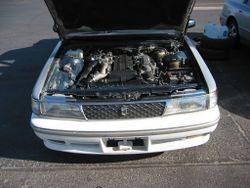 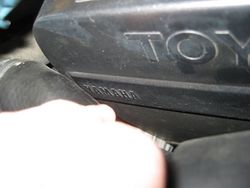 Yamaha badging on cam gear cover of the 1JZ-GTE

The 1JZ-GTE employs twin CT12A turbochargers arranged in parallel and blowing through a side-mount or front mount air-to-air intercooler. With an 8.5:1 static compression ratio, the factory quoted power and torque outputs are 280 metric horsepower (210 kW) at 6200 rpm and 363 newton metres (268 ft·lbf) at 4800 rpm respectively. These motors are over square (86.0mm bore x 71.5mm stroke). Yamaha may have had a hand in the development or production of these motors (possibly the head design), hence the Yamaha badging on certain parts of the motor, such as the cam gear cover. In 1991, the 1JZ-GTE was slotted into the all-new Soarer GT.

The early generation 1JZ-GTEs combined the inherent smoothness of an inline 6 cylinder engine with the revving capacity of its short stroke and early power delivery of its small, ceramic wheeled turbochargers. The ceramic turbine wheels are prone to delamination in the setting of high impeller rpm and local temperature conditions, usually a result of higher boost. The first generation 1JZ's were even more prone to turbo failure due to there being a faulty one-way valve on the head, specifically on the intake cam cover causing blow-by to go into the intake manifold. Also on the exhaust side a decent amount of oil vapor flows into the turbos causing premature wear on the seals. The later 2nd Gens had this problem fixed and in Japan there was actually a recall in order to repair the 1st Gens, though that does not apply to 1JZ's imported to other countries. The fix is simple, and involves replacement of the PCV valve (2JZ); all parts are available through Toyota.

The "thirrd Generation" of 1JZs were introduced around 1996, still as a 2.5 turbo, but with a reworked head incorporating Toyota's newly developed continuously variable valve timing mechanism (VVT-i) , modified water jackets for improved cylinder cooling and newly developed shims with a titanium nitride coating for reduced cam friction [2] . The turbo setup changed from parallel twin turbo (CT12x2) to a single turbo (CT 15B). The adoption of VVT-i and the improved cylinder cooling allowed the compression ratio to be increased from 8.5:1 to 9.0:1, making the 1JZ-GTE an interference engine. Even though the official power figures remained at 280 metric horsepower (210 kW) at 6200 rpm, torque was increased by 20Nm to 379 newton metres (280 ft·lbf) at 2400rpm. These improvements resulted in increased engine efficiency that reduced fuel consumption by 10%. The adoption of a much higher efficiency single turbocharger than the twins as well as different manifold and exhaust ports were responsible for most of the 50% torque increase at low engine speeds . This engine was used primarily in Toyota's X chassis cars (Chaser, Mark II, Cresta, Verossa), the Crown Athlete V (JZS170) and in the later JZZ30 Soarer, as the JZA70 Supra was long discontinued by this time.

It uses Sequential Electronic Fuel Injection, has an aluminum head and 4 valves per cylinder with some versions using VVT-i, along with a cast iron cylinder block. 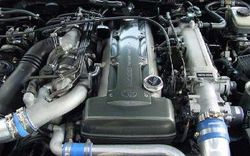 The 2JZ-GTE is an inline-layout, six-cylinder, belt-driven dual-overhead camshaft, air-intercooled, twin-turbocharged, cast-iron engine designed and manufactured by Toyota Motor Corporation that was produced from 1991 through 2002 in Japan. Final development of the 2JZ-GTE was outsourced to German engineering firm Johann A. Krause Maschinenfabrik GmbH for refinement to meet production car homogolation requirements set forth by the former All-Japan Grand Touring Car Championship. Two gearboxes were offered for the engine:

The 2JZ-GTE's original intended use was to power the Toyota Aristo V (JZS147) in 1991 before becoming Toyota's flagship performance engine in the Toyota Supra RZ (JZA80) in the following year. Its mechanical basis was the existing 2JZ-GE, but differed in its use of sequential twin turbochargers and an air-to-air side-mounted intercooler. The block, crank, and connecting rods of the 2JZ-GE and 2JZ-GTE are the same with the exception that the 2JZ-GTE has a forged crankshaft and oil squirters installed in the block to aid in cooling the pistons. Toyota's VVT-i variable valve timing technology was added to the engine beginning in September 1997, whence it phased out the original engine. Consequently, maximum torque was raised for engines selling in all markets.

The addition of twin turbochargers, jointly developed by Toyota with Hitachi, in sequential configuration had raised its commercially-cited output from 230 PS (166 kW, 225 hp DIN) to the, then, industry maximum of 280 PS (206 kW, 280 hp DIN) at 5600 rpm. In its first appearance, torque was advertised as 44.3 kgm (435 Nm, 320 lbft) to be later recited as 46.4 kgm (455 Nm, 335 lbft) with the introduction VVT-i in 1997. The mutually-agreed, industry-wide output ceiling was enforced by Japan's now-defunct "Gentlemen's Agreement" exclusively between Japanese automakers selling to the Japanese domestic market. For the North American and European markets, power was raised to 320 hp DIN (229 kW) at 5600 rpm.

The export version of the 2JZ-GTE achieved its higher power output with the use of newer stainless steel turbochargers (ceramic for Japanese models), revised camshafts, and larger injectors (550 cc/min for export, 440 cc/min for Japanese). The mechanical similarities between the Japanese-specification CT20 turbine and export-specification CT12B turbine allow interchangeability of the exhaust-side propeller shaft. Additionally, the export-exclusive CT12B turbine received more durable turbine housings and stainless steel turbine and impeller fins. Multiple variants of the Japanese CT20 turbine exist discretely, which identified with the B, R, and A part number suffixes (eg.: CT20A).

The flagship 2JZ-GTE engine is popularized as the adversary to Nissan's RB26DETT, both with regards to their iron block-attributed durability, inline-six configuration, aftermarket recognition, and auto racing pedigree.

The 1.5JZ is not a production engine but is created by combining a 1JZ head with a 2JZ bottom end. The 1JZ cylinder head will, with modifications to the oil gallery alignment, bolt on to the 2JZ bottom end.

It should be noted that the 2JZ-GE (Naturally Aspirated) bottom end has no oil squirters as found in the 2JZ-GTE (Twin Turbo) bottom end. Galleries and mounting bosses do exist in the GE block to allow the addition of oil squirters, however this requires machining.

Using a 2JZ bottom end with the 1JZ components allows an extra 500cc of displacement.

Reasons for this conversion is a matter of opinion and discussion. The 1jz has a larger Exhaust valve at 30.0mm yet a smaller intake valve of only 31.0mm whilst the 2JZ has a 33.6mm Intake valve and a 29.0mm exhaust valve. The debate is, that it was easier to go 1.5JZ instead of 2JZ due to electronics, and configurations for pre existing manifolds etc.

What is known is that the 2JZ head compared to the 1JZ head has more restriction in the 5th and 6th cylinder exhaust ports due to an S shaped casting. The 1JZ also has different shaped combustion chambers which, when directly placed on a 2JZ block, increases the compression slightly and leads to a power increase when using unworked heads. Once worked (ported and chambers reshaped, valves resized) the heads have been proven to flow much the same.

The most likely reason for the setup would be if the owner of a worked 1JZ engine suffered from bottom end failure or if they wanted the extra displacement and torque of the 2JZ bottom end, as the heads are interchangeable. Thus all the existing manifold, plumbing, fittings, turbo(s) could be retained making for a very cost effective power and torque upgrade.

In around 2000, Toyota introduced what are probably the least recognised members of the JZ engine family – the FSE direct injection variants. These FSE 1JZ and 2JZ engines are aimed at achieving minimal emissions and fuel consumption together with no loss of performance.

The 2.5-litre 1JZ-FSE employs the same block as the conventional 1JZ-GE everything up top, however, is unique. The ‘D4’ FSE employs a relatively narrow angle cylinder head with swirl control valves that serve to improve combustion efficiency. This is necessary to run at extremely lean air-fuel ratios around 20 to 40:1 at certain engine load and revs. Not surprisingly, fuel consumption is reduced by around 20 percent (when tested in the Japanese 10/15 urban mode).

Interestingly, normal unleaded fuel is enough to cope with the FSE’s 11:1 compression ratio.

The direct injection version of the 1JZ generates 147 kW and 250Nm – virtually the same as the conventional VVT-i 1JZ-GE. This highly efficient engine is fitted to the 2000 Mark II, 2001 Brevis, Progres, Verossa, Crown and Crown Estate. All are fitted with an automatic transmission.

The 3-litre 2JZ-FSE uses the same direct injection principle as the smaller 1JZ version but runs an even higher 11.3:1 compression ratio. This engine matches the conventional VVT-i 2JZ-GE with 162 kW and 294Nm. The 2JZ-FSE is fitted to certain 1999 Crown models and the 2001 Brevis and Progres. Again, all use automatic transmissions.