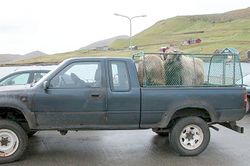 A Toyota light truck based on the Hilux platform, seen here in the Faroe Islands carrying two rams.

This platform has gone through seven distinct generations, although some of the later derivative vehicles (specifically, the Hilux Surf/4Runner) have gone though fewer. In general, the platform and the pickup truck based on it are considered to be of the same vintage; for example, a 3rd generation Hilux is based on the 3rd generation Hilux platform.