The Toyota GR engine family is an open-deck, die-cast V6 piston engine series. The GR series has a 60° aluminum block and aluminum DOHC cylinder heads. Some versions use MFI, some have direct gasoline injection, and some have a combination of direct injection and MFI. This engine series also has 4 valves per cylinder, features forged steel connecting rods, one-piece cast camshafts, and a cast aluminum lower intake manifold.

Note: power ratings have changed due to SAE measurement changes. 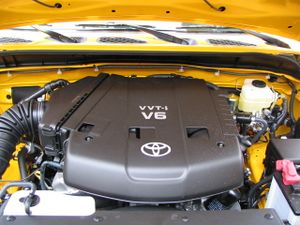 The 1GR-FE is the 4.0L version. Bore is 94 mm and stroke is 95 mm. Output is 236 hp (176 kW) at 5200 rpm with 266 lb·ft (361 N·m) of torque at 4000 rpm on 87 octane, and 239 hp (178 kW) at 5200 rpm with 278 lb·ft (377 N·m) at 3700 rpm on 91 octane. This engine features Toyota's single VVT-i, variable valve timing, system and a compression ratio of 10.0:1. Inside, the 1GR uses a taper-squish combustion chamber design with matching pistons to improve anti-knocking and engine performance, while also improving intake and fuel efficiency. Toyota adopted a siamese-type intake port, which reduces the surface area of the port walls and prevents fuel from adhering to such walls. This engine has special cast-iron cylinder liners cast into the block, which are a spiny type to improve adhesion between the liner and cylinder block. With these special thin liners it is impossible to bore the block. In the event of cylinder wall damage (scoring, deep protrusions, etc), the entire cylinder block must be replaced. For increased block rigidity, the 1GR also receives a high temperature plastic insulator/protector, which fills the empty space between the outer portion of the cylinders and block material common to open deck engines. For increased cooling efficiency, the 1GR employs water passages between the bores of the engine. There are such 2 passages for each bank for a total of 4. This reduces cylinder hot-spotting and keeps combustion chamber temperatures more uniform.

The 2GR-FE is a 3.5 L (3456 cc) version. Bore remains at 94 mm but stroke is reduced to 83 mm. Reported output varies depending on the vehicle application, but is approximately 268 hp (200 kW) at 6200 rpm with 248 lb·ft (336 N·m) of torque at 4700 rpm on 87 octane (R+M/2). This version features Toyota's "dual-VVT-i", variable valve timing on both the intake and exhaust cams. Valves are driven by roller-follower rocker arms with low friction roller bearings, and a unique, concave cam lobe design to increase valve lift over the traditional shimless lifter type system of the 1GR-FE. This increases overall cylinder head height to accommodate the slightly taller roller rocker system. Moreover, the cylinder head is segmented into 3 parts: valve cover, camshaft sub-assembly housing, and cylinder head sub-assembly. As such, this valvetrain is used across all other GR engines with dual VVT-i.