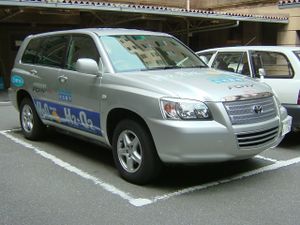 The Toyota FCHV is a series of prototype hydrogen fuel cell vehicles, presented in 2001.

The acronym "FCHV" stands for "Fuel Cell Hybrid Vehicle". This hybrid should not be confused with other hybrid electric vehicles with a combustion engine, but equipped with the FCHV. These vehicles do not only use an accumulator as a buffer, which is loaded when braking and following restarting for additional power, but the accumulator is the main energy source and can cover distance as the only power source. With low energy the accumulator can be loaded over the fuel cell. This concept is also found with other fuel cell vehicles. However, it concerns substantially a special control unit between electric motor and the combination of a large accumulator with a fuel cell. 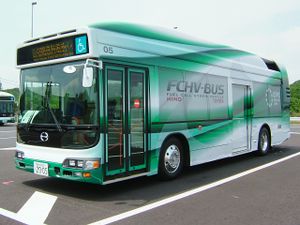 At present Toyota has five model generations of the FCHV, the first two FCHV-1 and FCHV-2 were pre-developments of the years 1997 and 1999. Larger attention reached the concept only with the inception of the FCHV-3, which has essentially reached the production stage.

The FCHV-3 is the prototype of a fuel cell vehicle, with that gaseous hydrogen in metal hydride memory (apparent without pressure fills) one carries. 90 kW fuel cell propels an electric motor parallel to a nickel metal hydride battery. Additionally there is a second accumulator as a buffer for driving with stored energy. The vehicle was presented at the "International Symposium on Fuel-Cell Vehicles" in March 2001 in Tokyo.

The FCHV-BUS is a fuel cell bus from Toyota.