The First Toyota Crown Majesta was introduced in Japan in October 1991. It looked very similar to its sibling, the Toyota Crown. At first the Toyota Crown Majesta was a trim level variant of the Toyota Crown series, called the Crown Royal Saloon G. The Majesta was an ultra-luxurious variant of the Toyota Crown and was slightly wider and heavier, but had 2 large engine choices. the 3.0 L 2JZ-GE engine borrowed from the Lexus GS, Toyota Supra and Toyota Soarer which produced 226 bhp (169 kW; 229 PS). The second engine offered was the 4.0L 1UZ-FE shared with the Lexus LS400. This engine was remarkably quiet and smooth and suited the Crown Majesta's comfortable and luxurious status. The 4.0 L engine had 256 bhp (191 kW; 260 PS). In 1992, four wheel steering was offered in compliance with the four wheel drive system, called 4WDi-Four. This boosted the cars handling and gave it increased traction and grip in wet and icy conditions. The Toyota Crown Majesta was very advanced for this time. It had options of a GPS navigation system, electric power steering, four wheel steering, and a Head-up display that projected key information on the inside windshield surface, above the instrument cluster. Prices for the Crown Majesta started at USD $32,100 for the lowest spec 3.0A model and rose to USD $51,000 for the V8 with four wheel steering. There was also an option for electric front and rear seats and heated front and rear seats.

The Crown Majesta was remodeled and released September 1995. Enhancements were made to the tail lamps with a vertical appearance to provide a distinguished difference from the Toyota Crown which uses a horizontal tail light design, similar to the Lexus LS made during this era. Some of the styling details to include the shape of the dashboard and the treatment of the rear window, tail lights and trunk lid are reminiscent of the Cadillac Deville of the same time period. The straight 6 engine is no longer offered. The V8 horsepower rating is improved to 265 PS (195 kW; 261 bhp) . Due to a softening economy in Japan, the equipment offered was simplified due to cost cutting efforts.

In August 1997, the front grille was restyled and HID headlights were introduced. VVT-i technology was offered on the V8, improving the horsepower to 280 PS (206 kW; 276 bhp), attached to a 5-speed automatic transmission. AWD was also no longer offered.

This version received a complete redesign, with a body style change from a 4 door hardtop to a sedan, and was influenced by the success of the Lexus LS in its appearance. The conservative appearance continues, including vertical tail lights. The Crown Majesta continues as a limosiune rental and official company car for senior level management. Two tone paint treatment is introduced. 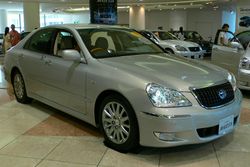 The Crown Majesta receives a complete redesign and was introduced July 6, 2004. In August 2006, the Toyota Celsior was no longer offered in Japan, due to the introduction of the Lexus brand. The Crown Majesta partially replaced the Celsior, despite objections from Japanese customers. The engine is upgraded to the 3UZ-FE, shared with the USA-spec Lexus LS. The transmission is upgraded to a 6-speed and 4WDi-Four returns to the upper level model. Enhancements are made to the interior and the special equipment offered continues, including rear view camera and parking assist technology. A supercharger is offered with the 6-speed transmission, allowing the engine to produce 340 bhp (254 kW; 345 PS), as well as air suspension. Prices are generally quoted around USD $69,400 for the Crown Majesta AWD.