The 3S-GTE is an in-line 4-cylinder 1998cc engine from Toyota, based on the 3S-GE with reduced compression ratio and addition of a turbocharger.

There are four generations of this engine, which started manufacture in 1986 to 2007.

The turbochargers used in the 3S-GTE engines are Toyota designs. The first and second generations used the Toyota CT26, although the second-generation turbo was modified for increased reliability. The third-generation engine uses the Toyota CT20b twin-entry turbo, and the fourth uses a proprietary CT20b turbocharger whose exhaust housing is actually cast into the cylinder exhaust manifold, rather than the normal practice of a separate exhaust housing after the cylinder exhaust manifold and it can only be used on the fourth generation 3sgte head and not backwards compatible like the CT20b of the third generation 3sgte. Up to 260 hp in stock engine. 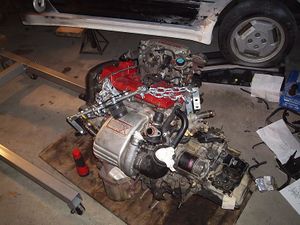 Depending on where the engine was intended to be sold the exhaust turbine is either ceramic (JDM) or steel (USDM). It was fitted to the MR2 , Toyota Celica GT-Four, and the Caldina. Its cylinders are numbered 1-2-3-4, cylinder number 1 is beside the timing belt. The Dual Over Head Cam (DOHC) 16 valve cylinder head designed by Yamaha is made of aluminum alloy. The pent-roof combustion chambers are complemented by a cross flow intake and exhaust layout. Spark plugs are located in the middle of the combustion chambers. A distributor based system is used to fire the cylinders in a 1-3-4-2 order.

The first and third Celica generation intake charge was cooled by a Water to Air intercooler while the second, third MR2, and fourth generation relied on an Air to Air system.

The crankshaft, located within the crankcase, rotates on 5 aluminum alloy bearings and is balanced by 8 weights. Oil holes are located in the middle of the crankshaft to provide oil to the connecting rods, bearing, pistons and various other components.

A single timing belt drives the intake and exhaust camshaft along with the oil and water pumps. The cam journal is supported on 5 points between the valve lifters of each cylinder and on the front of the cylinder head. The cam journals are lubricated by oiler port located in the middle of the camshaft.

To adjust the valve clearance, adjust the shims above the valve lifters (shim over bucket system). This allows for the replacement of the shims without the need to remove the camshaft.

The pistons are made from an aluminum alloy, design to withstand high temperatures. An indentation is incorporated into the pistons to prevent the pistons from "knocking" into the valves. The compression ration is 8.5:1 for the first and third generation and 8.8:1 for the second generation. Piston pins holding the pistons in place are locked by snap rings.

The cast iron cylinder block holds 4 86mm pistons and has a stroke of 86mm. Built into the cylinder block are coolant channels, which cools the block which houses the crankshaft.

At the bottom of the cylinder block is an oil pan which stores the oil. A panel is used to ensure that there are sufficient oil available in the oil pan, as the oil moves around the reservoir during movement of the vehicle. This prevents oil from being shifted away from the oil pump suction pipe.