The Toyota 3S-GE is an in-line 4 cylinder engine manufactured by Toyota as part of the S engine family and tuned by Yamaha Motor Company. The cylinders are numbered 1-2-3-4 with cylinder number 1 beside the timing belt. The cylinder heads are made of aluminium alloy. The pent-roof combustion chambers are complemented by a cross-flow intake and exhaust layout. The spark plug is located in the center of the combustion chamber. The ignition order of the cylinders is in the 1-3-4-2 order.

The crankshaft, located within the crankcase, rotates on five aluminium alloy bearings and is balanced by eight weights. Oil holes are located in the middle of the crankshaft to provide oil to the connecting rods, bearing, pistons and other moving components.

The intake manifold has four independent ports and benefits from inertia build up to improve engine torque at low and medium speeds.

A single timing belt drives the intake and exhaust camshaft. The cam journal is supported on five points between the valve lifters of each cylinder and on the front of the cylinder head. The cam journals are lubricated by an oiler port located in the middle of the camshaft.

The "Outer Shim Type System" allows for the replacement of the shims without the need to remove the camshaft. To adjust the valve clearance, adjust the shims above the valve lifters.

The pistons are made from an aluminium alloy, designed to withstand high temperatures. An indentation is incorporated into the piston head to prevent the pistons from hitting the valves, should the timing belt break (this is not true of the 3S-GE BEAMS motor). This is sometimes referred to as a "non-interference" engine. Piston pins holding the pistons in place are locked by snap rings.

At the bottom of the cylinder block is an oil pan which stores the oil. A baffle is used to ensure that there is sufficient oil available in the oil pan, as the oil moves around the reservoir during movement of the vehicle. This prevents oil from being shifted away from the oil pump suction pipe.

There are four generations of the 3S-GE, which were used in the Toyota Celica, MR2, Caldina, and Altezza. All 3S-GE engines had a displacement of 2.0 L. Additionally, the 3S-GTE engines were based on the 3S-GE designs.

First generation 3S-GE was produced from 1986 to 1989, arriving in both Northern American versions, as well as In Japan as a second variation. The Northern American engine was slightly less powerful, producing around 135 bhp (101 kW). This engine was the only Gen 1 3S-GE to come to North America, in the Celica GT-S (ST162). The JDM version, sported a more aggressive ECU, and among other things a lack of the EGR valve system, pushing the output to somewhere around 150 bhp (112 kW) and 129 ft·lbf (175 Nm) of torque.

The second generation was produced from 1990 to 1993, receiving a slight boost in output to 113 kW (154 PS). Peak torque went to 137 ft·lbf (186 N·m). It also proved to be a slightly more reliable engine. The second generation also did-away with the T-VIS system, which was replaced by the ACIS (Acoustic Control Induction System), proving to be much more efficient. T-VIS was, however, retained on the second-generation 3S-GE's turbocharged counterpart. And got 8 hools at the exhaust manifold. 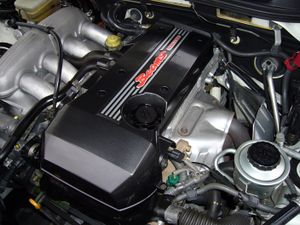 The fourth generation 3S-GE, also known as the BEAMS 3S-GE began production in 1997. The first version was equipped with VVT-i and produced 197 bhp (147 kW, 200 PS) @ 7000 rpm. It was available in a few models sold only in Japan - the MR2 G and G-Limited, the Celica ST202 SS-II and SS-III and the Caldina. BEAMS is an acronym which stands for Breakthrough Engine with Advanced Mechanism System.

The two variants are easily identifiable by colour. The cam covers on the earlier model are red and on the later model, black. They are often referred to as the "Red Top" and the "Black Top" respectively.

The "Grey Top" BEAMS 3S-GE was an available engine option in the Rav4 in Japan. Even though the valve cover on this engine is black, it is referred to as "Grey Top" to differentiate it from the Dual-VVTi "Black Top" in the Altezza. Power output is 177 bhp (132 kW, 180 PS) @ 6600 rpm.

These are common to all 3S-G engines.