The Lexus RX Hybrid is a hybrid crossover SUV sold by Lexus since 2005. The RX Hybrid uses the Lexus RX body design and a Lexus Hybrid Drive powertrain which combines a V6 gasoline engine with electrical motors.[1] First introduced in January 2004 at the North American International Auto Show, the original RX 400h became the first luxury hybrid,[1] and the world's second mass-produced hybrid sport utility vehicle, after the Ford Escape Hybrid. The RX 400h was also the launch vehicle of the Lexus hybrid lineup, which later expanded to include hybrid versions of other Lexus vehicles, including the GS 450h and LS 600h/LS 600h L.

The first generation RX 400h was sold until the 2008 model year, and an equivalent model, the Toyota Harrier Hybrid, was sold in Japan until the same year. In November 2008, Lexus launched a complete redesign of its hybrid crossover, the second generation RX 450h, at the Greater Los Angeles Auto Show.[2] The Lexus RX 450h was scheduled to go on sale in North America, Europe, Asia (including Japan), and other markets in 2009 as a 2010 model.[2]

Lexus debuted the RX 400h at the North American International Auto Show in 2004, with plans to launch the vehicle in the U.S. market. The equivalent Harrier Hybrid debuted in Japan on 22 March 2005, the same day as the Toyota Highlander Hybrid. The Lexus RX 400h made its U.S. sales debut in mid-2005, with over 9,000 pre-orders at launch.[3] The RX 400h's arrival in the U.S. had been delayed by several months; Lexus had announced in November 2004 that the American launch of the hybrid Lexus SUV would occur for the 2006 model year (with European and Asian launches during 2005).[4] 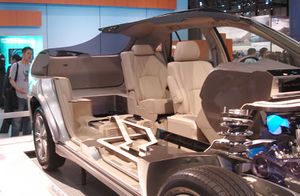 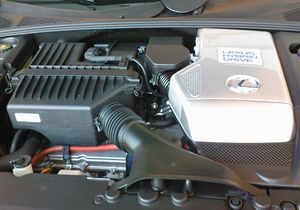 The gasoline-powered part of the RX 400h engine system is a 3.3 L 3MZ-FE V6, very similar to the one found in the RX 330. It produced 211 hp JIS (155 kW) and 288 N·m (212 ft·lbf).[9] The gasoline engine is aided by a maximum of two additional electric motors, one driving the front wheels, producing 167 hp JIS (123 kW) and 333 N·m (245 ft·lbf) and connected to the CVT gearbox,[9] and the other driving the rear wheels, producing 68 hp JIS (50 kW) and 130 N·m (95 ft·lbf).[9] The whole system, called Lexus Hybrid Drive (also Hybrid Synergy Drive), produces a maximum of 272 hp JIS (200 kW).[9] With Lexus Hybrid Drive, under normal driving conditions, only the front motor and gasoline engine are used. The rear motor is only used under full-throttle acceleration or when the front wheels lose traction.[1] The gasoline engine switches off automatically and the car runs completely on electricity when either stationary, decelerating, or being driven at slow speeds (0 to 40 miles per hour).[1] An Ni-MH battery is responsible for powering the motors,[1] and is charged by generators during deceleration or sharp cornering.[5]

Not only does the hybrid drive in the RX 400h improve fuel economy, with the assistance of the electric motor, the 400h/Harrier Hybrid can reach 60 mph (97 km/h) in less than 8 seconds,[1] quicker than the gasoline-only RX. Despite the increased performance, the RX 400h/Harrier Hybrid consumes roughly the same amount of gasoline as a compact four-cylinder sedan[10] and it qualifies as a Super Ultra Low Emission Vehicle (SULEV) in America.[11] Under the Japanese "10.15 mode" fuel consumption standard, the Harrier Hybrid can run 17.8 km per litre of fuel (compared with the standard coil-sprung V6 3.0 L Harrier, which returned 9.4 km/L). In Japan, it qualifies as a "4-star" LEV-car, where it produces 75% fewer emissions than the standard specified in Heisei 17 (i.e. year 2005). In the U.S., the RX 400h is certified with a revised 2008 EPA fuel economy rating of 26 mpg city, 24 highway for the AWD model. Because of the hybrid system's ability to shut off the gasoline engine at slower speeds or at idle, its fuel economy is better in city driving,[11] in contrast with conventional petrol and diesel drivetrains. 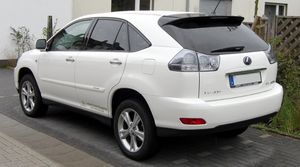 Compared to the standard Lexus RX, the RX 400h features a different front grille and round foglights, and also differently-styled LED tailights in place of the conventional LED ones on the RX330/RX350. Different exterior colors are offered. When launched in 2005, the RX 400h came exclusively with brushed aluminum interior accents, in place of the wood trim offered in the standard RX. This changed in 2006, when the RX 400h became available with Bird's Eye Maple wood trim. Additional changes for 2007 included the addition of Hybrid badging on the rear side doors. A hybrid information display on the navigation screen shows electrical motor, gasoline engine, and regenerative braking activation in real time.[11] Some RX 400h models without navigation screens display the information on a small monochrome display on the instrument panel, similar to Toyota Camry Hybrid models without navigation systems.

Lexus debuted the second generation RX hybrid, the RX 450h, at the Greater Los Angeles Auto Show in November 2008. The RX 450h was premiered alongside its non-hybrid equivalent, the third generation RX 350.[12] Both models were introduced as 2010 model year vehicles, with a hybrid concept vehicle, the LF-Xh, previewing their design direction at international auto shows a year prior.[13] Manufacturer's specifications indicated identical outward dimensions for the RX 450h with the RX 350.[14] The RX 450h was expected to go on sale in the U.S. in mid to late 2009,[12] with sales introductions for the RX 450h in Asia (including Japan) and Europe in the same year. 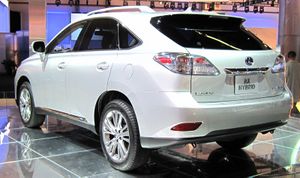 To visually differentiate the hybrid RX model, the RX 450h receives a unique grille with modified front fascia, LED headlights, hybrid badging, and different wheels.[12] The new model's LED headlamps are similar to the LS 600h, which also has LED headlamps (reserved for Lexus hybrid models only). The current concept vehicle for the third generation RX is the LF-Xh. The new hybrid version of the RX, which arrived a year after the concept as the RX 450h, was announced to debut at the LA Auto Show in November 2008 for the 2010 model year.[2]

The Lexus RX 400h was one of only four SUVs to achieve recognition on J.D. Power and Associates' 2006 Automotive Environmental Index of the top 30 most environmentally-friendly vehicles.[16] J.D. Power also awarded the RX 400h the top spot for entry-luxury SUVs in its 2005 Automotive Performance, Execution and Layout Study on owners' attitudes towards new vehicle designs.[17] At the 2005 GreenFleet Awards in the United Kingdom, recognizing environmentally friendly transportation, Lexus was recognized for introducing the RX 400h with the 4x4 Manufacturer of the Year title.[18] The RX 400h was named SUV of Texas at the 2005 Texas Truck Rodeo awards,[19] and was awarded recognition as a CNET editor's choice vehicle in 2005.[20]

Sales data for the Lexus RX hybrid are as follows.[21]