The Lexus IS is a series of entry-level luxury cars / compact executive cars sold by Lexus since 1999. The IS was introduced as an entry-level sport model slotted below the ES in the Lexus lineup (and outside of North America, the Lexus GS). The IS was originally sold under the Toyota Altezza (the word "altezza" is Italian for "noble") nameplate in Japan until the introduction of the second generation Lexus IS design. The Altezza name is still used at times to depict chromed car taillights like those fitted to the first generation model, known as 'Altezza lights' or 'Lexus-style' lights.[1]

The first generation Altezza (codename XE10) was launched in Japan in October 1998, while the Lexus IS 200 (JCE10) made its debut in Europe in 1999 and in North America as the IS 300 in 2000. The first generation, straight-6-powered IS featured sedan and wagon variants. The second generation IS (GSE20) was launched globally in 2006 with V6-powered IS 250 and IS 350 sedan models. A high-performance V8 sedan version, the IS F, premiered in 2007. Hardtop convertible versions, the IS 250 C and IS 350 C, debuted in 2008. According to Lexus, the IS designation stands for Intelligent Sport.[2]

Produced as a direct competitor to the luxury sport sedans of the leading European luxury marques, the Altezza/IS was designed with a greater performance emphasis than typically seen on prior Japanese luxury vehicles.[3] The design received critical acclaim at its 1998 launch, and was awarded Japan's "Car of the Year" honor for 1998-1999.[3] A year later, Lexus began marketing the IS equivalent models in Europe, and the IS debuted in the U.S. as a 2001 model.[4]

The Altezza came in 3 variants:

Lexus IS vehicles sold in North America, as well as the Japanese hatchback/station wagon version called the Gita (called Lexus IS SportCross in the U.S. and Europe) were only available in the 3.0 liter 6-cylinder version (2JZ-GE). In the U.S. market, sales fell below expectations; after hitting a high of 22,486 units in 2001,[5] IS sales dropped below the 10,000-unit mark in 2004.[6] The IS 200 fared better relative to sales targets in Europe and Asia, while still well short of the sales volume achieved by the Mercedes-Benz C-Class and other, mostly German-made competitors. This trend was indicative of Lexus' smaller global status; while Lexus' range of cars is very successful in North America, the marque's sales still lag behind its German rivals in Europe.[7] In Europe the IS 300 was only available with the 5-speed automatic transmission; the lack of a manual gearbox option may have limited sales in contrast to its rivals, the BMW 3-Series and the Mercedes C-Class. 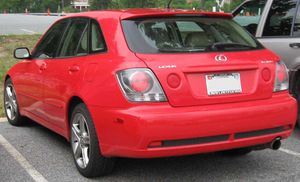 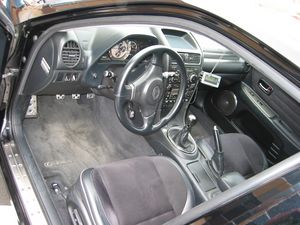 The IS 200/300 interior featured unique elements not typically found in other Lexus models. These included a chrome metal ball shifter, pop-up navigation screen, and chronograph-styled instrument panel (with mini gauges for temperature, fuel economy, and volts). The styling cues of the rear light clusters on the first generation Lexus IS were copied by a number of after-market accessory manufacturers for applications on other vehicles.[1] This iconic style of one or more internal lamp units, covered with a clear (or tinted) perspex cover made popular by Lexus, became known in many circles as 'Lexus-style' or 'Altezza lights'.[1]

Visually the exterior of the European IS 200 Sport and 300 saloon were almost identical, the only differences being the boot insignia and the larger engined model having clear front indicators. Inside the IS 300 gained full leather seats rather than the leather/ecsaine of the 200, plus auto-dimming rear view and side mirrors, plus HID headlamps.

The United States Environmental Protection Agency‎ listed the first generation IS as a subcompact car. Although it technically had enough overall volume to be called a compact, rear seat room exhibited subcompact dimensions.

The engineering work was led by Nobuaki Katayama, who was responsible for the AE86 project.[3]

The 2JZ-GE powered IS series are popular amongst tuners[8] in the U.S. because of their 6-cylinder engines. The Altezza is mostly popular amongst tuners not only because of its possible engine swap for the previous generation Toyota Supra's 2JZ-GTE motor,[4][9] but as it is viewed as the successor to the AE86.[9] Modified versions of the 2JZ-GTE have been seen with over 750 kW (1000 hp). 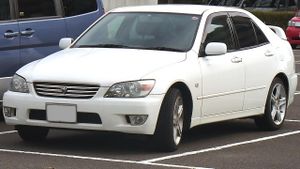 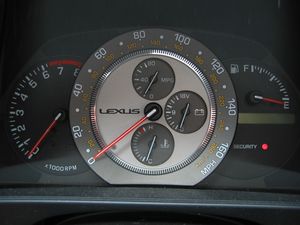 In Japan, the RS200 has a wide availability of tuning parts, the engine block is similar to the last of the SW20 MR2 and ST202 Celica but offers an upgraded Dual VVT-i. As a result, a number of tuning companies have modified the IS/Altezza over the years.

The RS200 is also used by many racing teams, including TRD (Toyota Racing Development), to race in various touring car racing series across Asia. A Lexus IS 200, based on a heavily modified RS200, has also raced in the British Touring Car Championship.[12]

The IS was completely redesigned for the 2006 model year and was introduced in the fall of 2005. The Toyota Altezza name ceased to be used with the introduction of the Lexus name in Japan. A pre-production car of the second generation IS model was shown in the 2005 Geneva Auto Show. The slow-selling SportCross station wagon version was dropped from the lineup worldwide.

The new IS was the second debut of Lexus' new L-finesse design philosophy on a production vehicle, following the premiere of the 2006 Lexus GS performance sedan. The new IS design featured sleeker, coupe-like contours, a fastback profile, and a repeated arrowhead motif in the front fascia and side windows. The forward design was reminiscent of the earlier Lexus LF-C coupe concept. The second generation IS made its North American debut at the 2005 New York International Auto Show.

For Japan, the United States and Canada, three IS models are sold by Lexus:

In parts of Europe, two IS models are sold by Lexus:

The IS 250 is available in Australia, New Zealand, Thailand, Singapore, Hong Kong, Chile (Automatic only), Taiwan, South Africa and South Korea. For China, Brunei, Indonesia and Middle East markets, one model, the IS 300, with a 3.0 L 3GR-FE V6 engine (without gasoline direct injection), 228 hp (170 kW), and rear wheel drive, is sold. The diesel-powered IS 220d is only available in Europe. 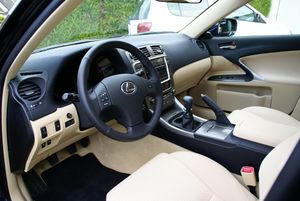 Compared to the first generation IS model, the second generation IS sedans offer a more typical Lexus interior with a focus on luxurious accoutrements. The interior features leather seats, lightsaber-like electroluminescent dash display lighting, and the choice of metallic or Bird's Eye Maple wood trim. Lexus SmartAccess keyless entry with push-button start is a standard feature. A high-resolution touchscreen navigation system, Bluetooth, a backup camera, and a Mark Levinson premium sound system with 14 speakers are available options. Other available features include a moonroof, power rear sunshade, and parking sensors. A precrash system is the first offered in the entry-luxury performance sedan market segment.

The IS 350's performance was praised in the February 2007 Road & Track Japanese luxury sports sedan comparison, in which the IS took first place and clocked a 0-60 mph time of 4.9 seconds and a 1/4 mile (~400 m) time of 13.5 seconds at 103.1 mph (165.9 km/h).[13] Citing independent testing by auto research firm AMCI, Lexus highlighted the IS' acceleration as the "fastest in its class."[14] Some say this marks Lexus' first foray into the sport compact market that compares fairly well with its German competitors. However, prevailing criticisms are that its steering is not as communicative as that of the BMW 3 Series,[15] the rear seat legroom (while improved over the first generation) is still tight, and that the higher-performance IS 350 is only offered with an automatic transmission. In response to criticism regarding the lack of a stability/traction control disable switch on 2006 IS models, Lexus added a VDIM/VSC off switch for the 2007 model year.

In the 2007 IS models, in addition to the on/off switch for the traction-control system, Lexus added a roof-mounted shark-fin antenna.[17][18] A new "X-Package" added a sport tuned suspension, special 18-inch alloy five-spoke wheels, illuminated scuff plates, and a front lip spoiler.

The introduction of the second generation IS model marked a resurgence in sales, with a 332% increase overall in 2006 compared to the previous year. In its first year of sales, the IS sold over 49,000 units, making it one of the ten best-selling luxury cars in the U.S.[19] Abroad, the Lexus IS spearheaded Lexus' growing sales efforts in Europe, Australia, and South Africa, becoming the best-selling model in Lexus' lineup in many of the aforementioned markets.

On 6 December, 2006, Lexus officially confirmed the existence of a high-performance variant of the second generation IS which they called IS F in a press release.[20] The IS F sedan premiered at the 2007 North American International Auto Show on 8 January, 2007 as the launch product of Lexus' F marque lineup of performance-focused vehicles.[21] The vehicle features a 5.0 L direct-injected V8 producing 416 SAE hp (423 PS, 311 kW) at 6,600 rpm, while peak torque is 371 ft·lbf (503 N·m) at 5,200 rpm.[22] The engine also features a two-stage intake system, engine oil and transmission fluid coolers and an oil pump designed for high-speed cornering. Images were leaked a couple of hours before the official announcement.[23] 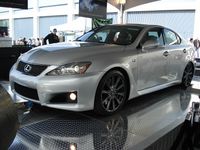 The debut of the higher performance variant of the IS was preceded by spy photos of prototype testing in Germany and California, along with other disguised Lexus test vehicles. The previous generation IS 430 prototype vehicle was indicative of future possibilities for the IS series, including the likelihood that a second generation high-performance IS model could come equipped with a V8 engine. It was also rumored that there would be a coupe and a convertible version for a 2009 model, as well as a convertible version of the V8-powered IS.

The chief engineer of the second generation IS was Suguya Fukusato, a rally driver,[25] while the IS F project was led by Yukihiko Yaguchi, who worked on the Toyota Supra.

After four years with only one body style, the Lexus IS returned with a second body style, this time in convertible form. On 2 October 2008, Lexus debuted a hardtop convertible version of the Lexus IS, the IS 250 C (2010-), at the Paris Mondial de l'Automobile 2008 (Paris Auto Show). [26] A more powerful IS 350 C version was also reported, with engine specifications analogous to those on the sedan models.[26] The IS convertible features a three-piece hardtop that can retract in 21 seconds.[26] The IS 250 C and IS 350 C will be offered with a six-speed automatic, while the IS 250 C will also offer a manual transmission. The IS 250 C is scheduled to go on sale in Europe in 2009, with IS convertible sales for North America targeted for fall 2009 as a 2010 model.[26]

A 2008 Lexus IS equipped with "F-Sport" accessories

The second generation IS already has a variety of tuning parts from famous Japanese tuning companies. Although the new IS has only been on the market for a short period of time, there are already a number of body kits for it, showing the high demand for aftermarket tuning parts. In 2007, the Japanese TOM'S aftermarket tuning firm produced a modified IS 350 with a revised ECU, new air filter, modified exhaust, and additional available performance enhancements ranging from suspension to brakes.[30] There are currently no compatible turbochargers for the IS250/350. Superchargers however, are available by companies LMS, and TOM'S producing close to 400 horsepower (300 kW) or more. The pending release of the 2008 Lexus IS F will feature the debut of the first production-sanctioned racing modifications to the second generation IS design. In 2007, Lexus announced a Project Vehicle Program for that year's SEMA show, centered around the high-performance IS F model. Lexus invited SEMA manufacturer members to submit their project Lexus vehicles for its show exhibition. It was the first time that the manufacturer had a formal presence at the aftermarket convention.[31] At the 2007 SEMA show, Lexus also launched a line of "F-Sport" parts and accessories for the IS 250/350.[32][33]