The first Taft was the F10 introduced in 1974, equipped with an 1.0L petrol engine and a 4-speed transmission with an 2-range transfer case. The F10 was available in short-wheel-base (SWB) softtop and hardtop versions. 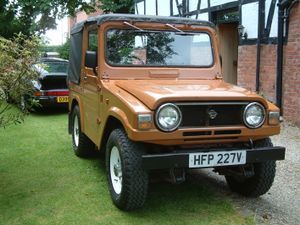 Around 1977, the F10 was replaced with the F20 series with the 1.6L 12R petrol engine. Around the same time the F50 2.5L DG diesel version was introduced. Both models featured an improved transmission and were available in SWB Softtop and Hardtop versions. In 1979, trayback/ute versions of the F20 and F50 introduced as the F25 and F55 models. Around 1983, updated F20/F25 models were introduced with an optional Deluxe version and optional 5-speed gearbox. At the same time the F50/F55 models where replaced with the F60/F65 with a 2.8L DL diesel, with the same Deluxe model version and optional 5-speed gearbox.

1981-84, Toyota sold a rebadged Taft known as the Toyota Blizzard. Fitted with the 2.2L L-series diesel, the LD10 Blizzard featured the same optional Deluxe model fitout as the Taft.