The Daihatsu Hijet is a microvan and pickup truck produced by the Japanese automaker Daihatsu. Despite the similarities between the Hijet name and Toyota's naming scheme for its trucks and vans (Hiace and Hilux), the name "Hijet" has been in use for Daihatsu's Kei trucks and vans since at least the 1970s, over two decades before Toyota took control. "Hijet", when transliterated into Japanese, is very similar to "Midget", one of Daihatsu's other mini-trucks.

In Japan, a more luxury version of the Hijet is known as the Daihatsu Atrai, which is also powered by a 660 cc Turbo engine producing 64 bhp (48 kW). 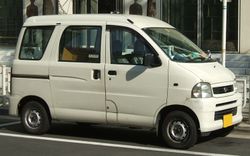 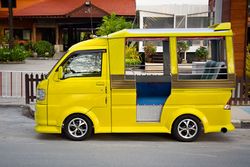 Hijets sold outside Japan are available with 1.0 and 1.3-litre engines. It is no longer consider a kei car as it is wider and longer. The Hijet Maxx/Hijet Jumbo is a pick-up truck or chasis cab which can be set up for other uses such as a moving stall. While Daihatsu Zebra a.k.a Daihatsu Citivan/Devan is a van based body. Perodua Rusa is a rebadged Daihatsu Zebra in Malaysia, released by Perodua. The Piaggio Porter is a licenced version manufactured in Italy, available also with an LPG or electric motor.[1] All of these variants are based on early version of the Hijet which has its front wheel located below the front door (or engine below the front seat).

In 2007, Daihatsu Indonesia launched the new Daihatsu Gran Max which is based on the newest Hijet (front wheels located forward of the door). It is powered by 1300cc and 1500cc engines, wider and longer than the kei car based Hijet. The Gran Max is available in minivan style and pick-up.

In 2002, Daihatsu debuted the Hijet Cargo Hybrid concept, a hybrid van, in Japan using a 660 cc engine. The car is based on the existing non-hybrid Hijet Cargo. Daihatsu calls it a mild hybrid design. Its design (called Daihatsu Mild Hybrid System or DMHS based on Toyota hybrid technology) is quite different from many existing hybrid design where as the gas and electric powered components assembled as one unit. The electric motor sits between the gasoline powered engine and the transmission unit. The car is 30% more fuel efficient than its gas-powered counterpart.

The hybrid minicars (called FEV - Ultra Fuel Economy - and Atrai Hybrid-IV) made its debut in 2002 as a concept minicar.[2] Its production was announced in October 2004 but as of May 2006 had not been released.