The Toyota Kluger, known as the Toyota Highlander in North America, is a crossover SUV assembled by Toyota under the Toyota brand name in its Kyūshū, Japan assembly plant and its Ikeda, Osaka, Japan assembly plant during 2008 and present. It was announced in April 2000 at the 2000 New York Auto Show and introduced as a 2001 model, arriving in late 2000 in Japan and in January 2001 in North America as a mid-year release 2001 model.[1] The Highlander is the crossover counterpart to the 4Runner and has become Toyota's best-selling SUV until the RAV4 outsold it in 2006.

Toyota could not use the "Highlander" name in Australia and Japan, since it is a trim line of the Hyundai Terracan SUV. 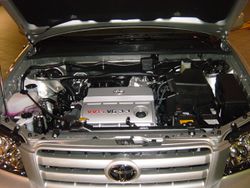 Under the bonnet (Amer: hood) of a Highlander

Called the Highlander in North America, the Kluger shared the Toyota Camry platform with its Lexus RX/Toyota Harrier cousin and came in five and seven-seat configurations, and became a sales success for Toyota in a number of markets across the world. The Kluger came standard with front wheel drive and offered all wheel drive as an option. The Kluger was not meant for serious off roading, unlike competitors such as the Jeep Grand Cherokee, Chevrolet TrailBlazer, and Toyota's own 4Runner. Although it was originally longer than the 1996-2002 4Runner, the Kluger was surpassed in length by the 4Runner in 2003.

In 2004 the wheels on the Limited trim changed from a 6-spoke, to a 5-spoke alloy. The base-model Highlander rims also changed from steel-rims to the alloy rims that were on the 01-03 Highlander Limited and B-Package.

The Kluger was available in three trim lines in Australia: the CV model, the CVX model, and the Grande model. A limited edition CV Sport model was also released in 2006. There was no hybrid model available in Australia. The only engine offered was the 3.3L 3MZ-FE V6.

The 3.0L engine was able to propel the Kluger from 0-60 mph in approximately 8.8 seconds. In 2004 the Kluger was given a new 3.3L V6 engine to compete with the more powerful V6 offerings from its competitors, mainly the Nissan Murano and the Honda Pilot. The 3.3L engine made it possible for the Kluger to reach 0 to 60 mph (97 km/h) in 7.8 seconds.

The Sport and hybrid models each had a distinctive grille design, differentiating themselves from the non-Sport, non-hybrid models. Wheel styling also serves to differentiate the various models -- the hybrid sports a unique twin-spoke design.

Base models are equipped with a limited slip differential, while up-scale models have a stability control system. 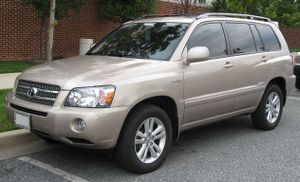 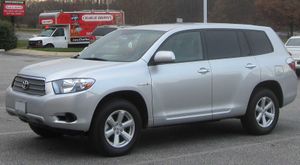 Initially, the Kluger was a regular, non-hybrid SUV driven by an internal combustion engine, but later Toyota introduced a hybrid version, the Kluger Hybrid that utilizes the company's Hybrid Synergy Drive technology combined with the company's 3MZ-FE 3.3 liter V6 engine. The hybrid drivetrain was unveiled at the 2004 North American International Auto Show, and was offered to the public in July 2005 as a 2006 model. In North America, the hybrid version was called the Highlander Hybrid. It is also the first seven-seat hybrid vehicle.

Currently, the Highlander/Kluger is produced in Japan for global markets. Toyota planned on building the Highlander in Blue Springs, Mississippi for the North American market in the 2011 model year. [5] However, the Prius will be built there instead, and the Highlander will instead be built at Toyota Motor Manufacturing Indiana in Princeton, Indiana, from the 2010 model year onward for North America, replacing Tundra production. [6] At this time, no decision has been made on Highlander Hybrid production at TMMI.

Three trim levels are offered (Base, Sport, and Limited) and buyers will also be able to choose between front-drive or all-wheel drive. Sport and Limited models get a standard rear-view camera that does not require purchasing the optional navigation system. Major options include leather seats, heated seats, a touch-screen navigation system, an upgraded stereo, a rear-seat DVD entertainment system, and a towing package that increases towing capacity to 5000 pounds. The five-passenger version was dropped, replaced by the 2009 Toyota Venza.

In Australia, the new generation Kluger was launched in August, 2007. There are three grades available, KX-R, KX-S and Grande. All grades are available with either 2WD or AWD. The base model KX-R is also available with either five or seven seats, whilst the latter grades are seven seaters only. Specifications are mostly similar to the US Highlander, sharing the same 3.5 litre V6 2GR-FE engine and five-speed automatic transmission. However, there are no plans at present to introduce a hybrid version of the Kluger into the Australian market. 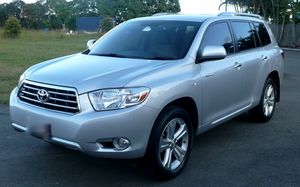 The NHTSA awarded the Highlander with five stars on side-impact crash tests.[7]

The Kluger Hybrid features Toyota's Hybrid Synergy Drive which allows an electric only powered mode for short distances and speeds. Weight, cost, and fuel economy have been improved over the previous hybrid.[9][10]

The expanded size and new features have led to an increase of 500 pounds to its curb weight. The EPA has rated the hybrid at27 mpg-US (8.7 L/100 km; 32 mpg-imp) city / 25 mpg-US (9.4 L/100 km; 30 mpg-imp) highway[11], the Highlander's fuel economy, while better than the Lexus RX400h's, lags behind the compact 4cyl Ford Escape Hybrid, but still produces significantly fewer emissions than the non hybrid version.

The hybrid continues to use the same 3.3L V6 from the prior Highlander.