The current head of TMCA is Ted Okada and David Buttner is TMCA's senior executive director of sales and marketing. John Conomos is Chairman Emeritus and is the Principle Policy Advisor on TMCA. Before Ted Okada, Ken Asano was the head of TMCA.

Toyota's tagline is 'Oh What a Feeling!', which has been used in media since the mid-1980s. It is almost always accompanied by a person jumping and freezing in mid-air.

TMCA first began in 1958 where Toyota LandCruisers were imported by Thiess Toyota for the Snowy Mountains Hydro-electric scheme. By 1963, assembly of Toyota vehicles in Australia began by AMI, taking place at the production plant in Port Melbourne, Victoria. The production line of Toyota vehicles in 1963 was that of the Toyota Tiara. One of the leading forces of getting Toyota established in Australia was Kennath Hougham.

A production plant in Altona, Victoria was established and began the production of engines in 1978, following the progressive growth of AMI.

The first AMI exported car was a Toyota Corona wagon in 1986 headed for New Zealand.

The one-millionth locally built Toyota was produced in 1992.

The two-millionth locally built Toyota was produced in 2004.

In 2005, the ten-millionth worldwide Toyota Camry was built at TMCA's Altona plant.

The complete closure and end of all Toyota production operations at the Port Melbourne plant took place in May 2006. All manufacturing was shifted to Altona.

The milestone of the 500,000th TMCA vehicle export also occurred in May 2006. The vehicle was a Toyota Camry, headed for New Zealand.

As of 2006, TMCA's Altona plant in Victoria produces the Toyota Camry. Production of the Toyota Avalon has ceased, due for replacement on the manufacturing line by the Toyota Aurion, which shares many components with the Toyota Camry. TMCA has expressed interests in locally building the Toyota Kluger 4WD at Altona in the future.

TMCA will start to build the next generation Toyota Camry Hybrid in 2010 after securing a $35 million subsidy from the Federal Government. "[1]

They have been in the position of Australia's top seller of new cars since the sales period of 2003-2004, where that position was taken over from Holden.

In the sales period 2006-2007, Toyota Australia became the first automotive company from 1978 to have been the leader in total sales, passenger vehicles sales and commercial vehicles sales. 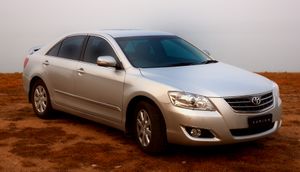 TMCA currently offers a large range of motor vehicles in Australia for private and fleet buyers.

TMCA currently supports motorsport in the form of the Australian rally, with a Toyota Racing Development livery Toyota Corolla.

Toyota Racing Development, or TRD, also forms TMCA's tuning division to create performance versions of common Toyota vehicles. The tuning division was launched in 2007 and is managed by Prodrive. It is designed to compete with rival makers Ford and Holden, with their tuning divisions of FPV and HSV respectively. The first vehicle released by TRD was the TRD Aurion, a supercharged version of the Toyota Aurion large car. The TRD Hilux, a supercharged version of the Toyota Hilux ute, is due for release in the second quarter of 2008. As of December 2008, however, Toyota has decided to cease TRD manufacturing due to an "operational change". All production of both the TRD Aurion and Hilux is scheduled to cease by 31st March 2009, and stock will be cleared by mid 2009.

TMCA is currently the premiere sponsor of the AFL Premiership. The original sponsorship deal was signed for the 2004-2006 seasons. Furthermore, a contract was signed on 16 July 2006 at the Telstra Dome in Melbourne to extend this contract by two years.