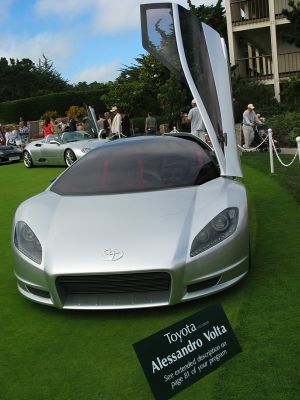 The Alessandro Volta at the Pebble Beach Concours d'Elegance in 2004

The Toyota Alessandro Volta is a concept car developed in the collaboration of the Japanese manufacturer Toyota and the Italian design company Italdesign Giugiaro. The concept vehicle named after Alessandro Volta, the Italian physicist who invented the battery, was officially unveiled at the 2004 Geneva Motor Show and it is a study of a hybrid electric sports car.

The concept never materialized as a production car due to high costs involved.

The car was built on a carbon fiber chassis and seats three people abreast.

It features a four wheel drive hybrid electric powertrain of the Lexus RX 400h which combines a 3.3-litre V6 gasoline engine with two electric motors. The gasoline engine is fitted behind the rear axle and there are additional two electrically powered engines, one on each axle. The combination develops a maximum output of 300 kW (408 bhp), which enables the car to accelerate from 0 to 100 km/h (0 to 62 mph) in 4.03 seconds and reach the top speed of 250 km/h (155 mph). It uses drive-by-wire controls.